Homes for Sale in Poulsbo

Though the competition is stiff in Kitsap County, Poulsbo may lay claim to having the most character of any city in this part of Washington. “The Jewel of Kitsap County” is known throughout the region as much for its Norwegian traditions as its enviable spot on Liberty Bay.

Residents of Poulsbo, Washington enjoy an incredible sense of community, which is evident throughout the year during different festivals and events. It’s a unique city where everyone feels like a friend.

As one of the larger cities in Kitsap County, Poulsbo has enjoyed an unusually stable economy over the past ten years. Like other towns and cities in this part of Washington, Poulsbo saw a 1% increase to their job growth this last year. Over the coming decade, it’s expected to improve by 36.%, which beats out the national average of only 33.5%.

While the average resident here makes $27,989 – compared to the average U.S. citizen’s annual income of $28,555 – that number is a bit deceiving. Poulsbo is extremely popular with retirees who often work part-time or seasonal jobs.

That’s why the average household income here of $57,296 is substantially more than the national average of $53,482.

The majority of jobs in this city are connected to the following industries:

Many residents also work in surrounding towns like Silverdale. Thanks to the Seattle-Bainbridge Ferry, some residents even commute into Seattle for work.

Poulsbo, Washington is part of North Kitsap School District. Parents in this district have ten schools to choose from for their children:

There are several private schools in Poulsbo and nearby Bremerton, too:

Poulsbo is home to a satellite campus of Olympic College, as well. The 39,000 square-foot site is located on 20 beautiful acres.

Dining and Shopping in Poulsbo

For decades, Poulsbo was known all over the globe for its world-famous bread. Fortunately, Sluy’s Bakery still bakes their beloved “Poulsbo bread” every single day. You will also find plenty of cookies, cupcakes, cakes, and donuts here, all of which are made by hand. The family-owned bakery is more than 50 years old and still uses many recipes for items like Fattigmand, Cardamon bread, and Julekake that originated generations ago back in Norway.

Tizley’s is another excellent place to go to for handmade food created from old-world recipes. This European gastropub’s menu draws from German, Italian, Irish, and Nordic cuisines. They are especially well-known for their 11 taps, which feature a continually rotating selection of beer. Some are local brews, others are imported, but Tizley’s owners pride themselves on always serving beers that are either new-to-market or hard-to-find.

If you love Italian food, you’ll find yourself returning again and again to Sogno di Vino. The restaurant’s Executive Chef, Willem Reinders, is originally from the Netherlands, but he has experience working in Belgium, Paris, and London, as well. Among other things, the restaurant is known for sourcing local ingredients from places like Painted Hills Beef, Mount Townsend Creamery, and Full Tilth Farms.

When the weather is beautiful, there’s no better place in town to enjoy a casual meal with friends than The Loft. It’s a great restaurant all year round, but when summer comes, this hotspot features outdoor seating right on the bay that can’t be beaten. It also doesn’t hurt that the menu here offers items like fresh-caught salmon and plenty of exotic cocktails.

Have a sweet tooth? Look no further than Boehm’s Chocolate of Poulsbo. Inside, you’ll find all the handmade chocolate treats you could ever want – and probably a few you didn’t even know about. While the Poulsbo location has been here for more than 30 years, Julius R. Boehm started his homemade candy business back in 1940 after arriving here from Austria.

Of course, this part of the country is known for its coffee. Residents of Poulsbo enjoy many options like Hot Shots Java and Viking Brew Coffee when they’re looking to jumpstart their mornings.

That other drink people associate with Washington is also prevalent in Poulsbo. If you enjoy craft beers, you can get yours right from the source at the following breweries:

There are plenty of others located throughout Kitsap County, as well.

When it comes to groceries, residents don't lack for options. You can choose from:

There is a Safeway and Walmart Supercenter in town for everything else you need.

For other types of shopping, there’s the Poulsbo Village and some other malls in Silverdale.

At some point, you’ll probably also want to pay a visit to Nordiska for some Nordic decorations and accessories to add to your new home in Poulsbo. This city is incredibly proud of its Norwegian roots, so even residents without Norwegian ancestry tend to get in on the act.

If all of these dining and shopping options aren’t enough, keep in mind that Poulsbo residents can take the Seattle-Bainbridge Isle Ferry into Seattle. This ferry runs every 50 minutes and the trip across the sound is only about a half-hour.

Having Fun in Poulsbo

In 1975, the actual King of Norway visited Poulsbo to celebrate 150 years of Norwegians emigrating to the U.S. That’s how much pride this city takes in its heritage. Over the years, Poulsbo’s love for all things Norwegian has earned it a long list of affectionate nicknames like “Little Norway,” “Lil’ Lutefisk,” and “Valhalla on Puget Sound.”

This pride is on display throughout the city, too. One of the best examples might be The Norseman, a 12-foot statue of a Viking that stands atop a platform which reads, “Welcome to Poulsbo” in Norwegian.

There are numerous Norwegian celebrations held throughout the year in Poulsbo, as well. For example, every Summer Solstice, townspeople gather to enjoy the Midsummer fest, complete with folk dancing, a giant bonfire, Norwegian cuisine, and much more.

However, the biggest celebration occurs during Viking Fest. Held in May to commemorate Norway’s independence, the festival includes a parade, strongman competition, cycling competition, art contest, donut-eating contest, lutefisk-eating contest, carnival rides and games, live music, and a lot more. Tens of thousands of people flock to the city for three days of unforgettable fun.

Of course, residents occupy their time many other ways throughout the year, too.

The SEA Discovery Center is fantastic. This aquarium is dedicated to housing animals from the Puget Sound and the Salish Sea. It even features a replica tidal pool that you can stick your hand in to touch sea anemones, sea stars, and much more. The facility hosts a summer lecture series for adults, as well, which is an excellent way for locals to learn more about the local marine ecosystem and how they can help maintain it.

Speaking of learning about the area, there’s the Poulsbo Maritime Museum. Guests can learn all about the incredible maritime history of North Kitsap County through both creative displays and interactive exhibits. It even houses artifacts that go back to some of the city’s earliest days.

If you travel down the coast and head east, you’re in for a great time at Clearwater Casino and Resort. Choose to play slots, poker, table games, or bingo. There is also a new schedule of live music and entertainment every month. Many residents will tell you it’s worth the trip to enjoy a meal at Agate Pass Deli, The Clearwater, or one of their other eateries.

Parks and Recreation in Poulsbo

Of course, given its spot on Liberty Bay, there are plenty of other natural attractions right in town and the surrounding area. For one thing, panoramic views of the bay will never get old. They will regularly include marine life and any number of boats that are coming into the dock or merely passing by.

The city is crisscrossed with trails, as well. At 40 acres, Fish Park Trail is very popular with locals who like to enjoy a bit of exercise or take their dogs for a walk. It features massive public art displays of fish, but you may see the real thing as you stroll over the park’s many bridges.

Other popular destinations in Poulsbo for enjoying the natural beauty of the Pacific Northwest are:

If you’re looking to get in the water, Liberty Bay Marina and Poulsbo Yacht Club are two great options for housing your boat. You can also paddle in with a kayak from any of the city’s beaches during the summer months. From Liberty Bay, head down to the Port Orchard Strait and follow it in either direction.

Never kayaked before? The local Olympic Outdoor Center has all the equipment you need and holds regular classes for those who want to learn how to kayak or paddleboard.

Homes for Sale in Poulsbo

Poulsbo always has a very active real estate market. Much of it is driven by retirees who are looking for a city that offers equal opportunities for relaxation and recreation. However, there is also always constant demand from people who need more room for a growing family. The combination of Poulsbo’s small-town feel and entertainment options make it a fun place to live for people of all ages.

While this demand means most houses in Poulsbo cost more than comparable homes elsewhere in Kitsap County, the good news is that most come with reasonably large lots. So, even though you may be just a few minutes from downtown, you’ll never feel crowded.

Most homes here are three bedrooms with two bathrooms, but there are plenty of other options to consider. You could also purchase an empty lot and build the home of your dreams. Some of those lots are even near the shore, which would give you an incredible view of Liberty Bay right from your house.

Would You Like to Find a House for Sale in Poulsbo?

Would you like to become a part of the thriving Poulsbo community? Are you looking for a home in a great school district, that’s near the water, or in a city that always offers plenty to do? How about some combination of the three?

If so, I would love to show you houses for sale in Poulsbo. As a real estate broker with more than 15 years of experience serving Kitsap County, I love helping people explore this incredible city. My experience ensures I’ll make the most of your time by showing you homes in Poulsbo that closely match your unique requirements.

Our website features the best Poulsbo real estate search for homes, condos, land, and foreclosure properties available. It is the only site you will ever need! It is easy-to-use and updated by the official Realtor®’s database every 15 minutes.

You can save searches, and get daily email alerts of new listings, price changes, sold data, and market reports. Our Interactive Map Search allows you to view properties on a map or refine your search by drawing the boundaries around the area you desire.

Curious about what’s happening in your neighborhood? You can create a custom market report to see what’s active, under contract, and sold in your community!

Considering selling or refinancing your home? Get an INSTANT property valuation now!

Contact us today to find out how we can be of assistance to you! 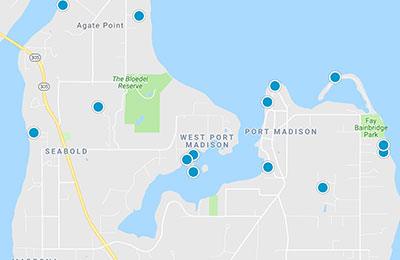